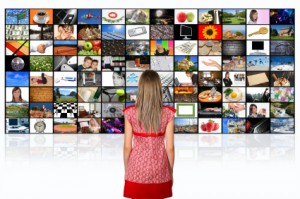 What does leading-edge look like?  How about state of the art?  Innovative?

How do you see streamlined?  Pioneering? Revolutionary?  Integrated approach?

Yesterday I blogged about the old brain (aka the brain that buys) being visually oriented.  I got several e-mails (yes, e-mails – I get less than 1% of my response in the comments) defending words and how important they are.  Not surprisingly, these e-mails weren’t from copywriters but from SEO’s but I digress…

There’s no doubt that words are important.  I am not debating that.  Words are critical.  However, it’s important to note that, by all accounts, language was “invented” approximately 40,000 years ago.  Written language came about 10,000 years ago.  No matter what your theory of evolution is, you know that the brain has been around for millions.  (Over 450 million to be precise.)

The old brain – which is also the brain that makes your buying decisions — sees things in pictures.  It’s not qualified to process written language.  Yes, it does it but it’s s-l-o-w — and words – especially complicated ones – make it even s-l-o-w-e-r by pushing the decoding process onto the new brain, which makes you want to “think about it” instead of act.

With that said, words ARE important because that’s how people find you in Google, not to mention how they find stuff on your site.

So, what’s the #1 key to online wordsmithing?

Technically, there are two.  First, is the word connect.   The second is truly one of the biggest secrets to your success and that’s to write in pictures.

At the beginning of this post, I asked you what a bunch of words looked like.  I pulled all of them from the home page of a heavily trafficked B2B site.  Frankly, it’s almost impossible to picture any of those words.    Why?  Because they’re not tangible.  The buying brain likes tangible words (red hat, for example.)

So, after you write your sales copy, edit it.  Eliminate – or at least reduce – the words that would make you “think,” thus slowing down the sales process.  Your users — and their actions — will thank you.