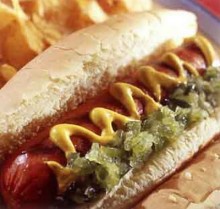 Yesterday was his birthday party.
I took Anonymous and his younger brother (also nameless) out for lunch so that his parents could get ready for the party. (These days, birthday parties require event planners, the purchase of small countries, private planes to jet everyone there and back and so on…)
The littlest one (we’ll call him 2.0) is 11 months. I’ve never seen a faster kid in my entire life. He thinks he is some sort of Ethiopian sprinter and he really is one of those kids that should have a leash. (I refrain from comment.)
2.0 prefers cougars. No, not the animals, older women.
So, as I was busy watching him chase around two adorable eight year olds, his older brother (we’ll call him THE ONE, as he’s jealous enough of his younger brother without me implying that 2.0 is a newer, better version) wandered over to another table. I could see him out of the corner of my eye, watching something very intently.
“Excuse me,” he said. (No, that is not an embellishment; the kid has better manners than half the men I’ve dated.) “WHY ARE YOU EATING YOUR HOT DOGS LIKE THAT?” (By the way he enunciated “LIKE THAT”; I could tell he was irritated for some reason.)
The three kids (all under age 5) looked at THE ONE in amazement.
I rapidly scooped 2.0 up (he, of course, responded with screams that would scare off a serial killer) and went over to the table to get THE ONE. (I don’t have my own kids so all you parents out there who think this is easy, you know what you can do and where you can go.) THE ONE continued explaining to the other children that you did not have to eat a hot dog with a fork because well, you could eat it in its “house” (the bun.) THE ONE is incredibly precocious and very wise for his age – and unfortunately, he also has the Africa temper (read: 0 to 60 rage level in 2.2 seconds) and patience (read: none whatsoever.) So, not only was he annoyed that the kids were not eating the hot dog properly but he was also APALLED that they were not using liquid gold (otherwise known as ketchup).
The family was amused by THE ONE. The kids were laughing and the parents smiling. (If I was THE ONE’s parent, I probably would have been embarrassed but alas, I am the aunt and I love the fact that THE ONE is not shy and speaks his mind.)
THE ONE is much like my brother (it must be genetics) in that when he thinks that someone doesn’t understand him, he speaks louder. As if that helps.
And those kids definitely didn’t understand him as they didn’t speak a lick (as in NOT one word) of English. (The entire family is Japanese. They are here on vacation for two weeks and through lots of hand signals in a subsequent, er, conversation, I learned their interpreter was sick so they had ventured out on their own. That, in itself, will be the subject of a different post. And no, I have no idea how they ended up with hot dogs in the first place.)
Finally, in desperation, my nephew picked up the youngest girl’s hot dog in its “house” and showed her exactly how to eat it by taking a large bite of it. (Insert mock horror here.)
The kids all looked like they had seen a miracle right before their very eyes, took one look at their parents, didn’t wait a nanosecond for their approval, put down their forks and started eating the hot dogs with their hands. You know, the way a hot dog should be eaten.
Hmmmm… SHOULD BE EATEN. SHOULD BE DONE. Kind of loaded statements, don’t you think? Is there really a right way to eat a hot dog? An ice cream cone?
And what, praytell, does this silly hot dog story have to do with web marketing?
Simple.
One of the biggest misconceptions that web marketers make is that they think everyone behaves just like them online.
NEWSFLASH: They don’t. (Technically, we don’t even behave like we say we do when it comes to online stuff.)
Just because you use the back button doesn’t mean that everyone does. What happens when you’re at a place that doesn’t allow caching? Some workplaces or a library, for example. What happens when you learned to use the internet on a browser/service where back buttons didn’t work or were disabled for security reasons?
Last month, I was in London with one of the most successful mail order CEO’s in Europe. The guy is brilliant (in the US and the UK sense of the word.) But I constantly wanted to smack him. Why? Because every time I told him to go to a specific URL, he’d use the search engine to find it. So, instead of going to landsend.com, he’d go to Google, type in landsend.com, see the listing and then click on it. Good Lord. What a waste of flipping time.
Did you know that statistically over half the population does exactly what he does?
My dear friend, Grace Cohen, always says “you don’t know what you don’t know.” Like the kids who didn’t know that eating a hot dog with a fork is downright silly, your users don’t know what to do on your site, unless you make it LOUD and CLEAR.

From a user’s perspective, if you do not see it, it does not exist.

That’s important, so please let me repeat it: “from a user’s perspective, if you do not see it, it does not exist.” If it’s important and you want your users to do or see it, you need to ask or show it. This applies to everything from getting them to sign up for a FREE newsletter to your navigation.
I was going to end this post with something pithy like “get your buns in gear” but honestly, this is far too serious to make “you need to Ketchup” comments.
So, please…. As Tom Ziter says, put your dumb hat on and go to your site and see what you can do to improve it. Here are a couple good places to start:

Use a Recently Viewed box in the righthand column of your site.

If you sell stuff online, list recently viewed items (look at www.sweetenergy.com, for an example.) If you don’t, you can use recently viewed searches, pages, and so on. Recently Viewed is a great way for users to “backtrack” without having to use the text search box. (A huge place of abandonment.)

Put HOME in your top and bottom navigation.

No, EVERYONE does not know that you can click on a logo and get home. Period. End of story. Yes, I know it’s ugly and not cool. Deal with it.

Beef up your meta descriptions (and make them aggressive!)

Take a close look at your navigation.

Make sure that everything you want to be found for is listed and crystal clear. (Check out my trash-y post here now as well.) If your customer wants an iPod, are they really going to look under MP3 players? Hot diggity dog! That answer is “no!”