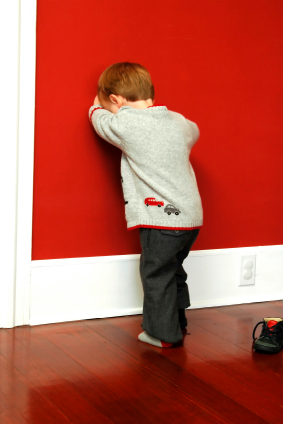 Have you been to time-out as an adult?  (No, not Time-Out, the trendy restaurant in Dubai, the place in the corner of your house or on the stairs.)

I was there just yesterday and although I can’t say much for it as an effective disciplinary tool, it did get me to think…  But first with the story…

I was at my brother’s house with my two nephews: Anonymous and Nameless.  Anonymous is three and a half and Nameless (aka 2.0 or TWO, which stands for The Wee One) is 16 months.

I was making dinner and the boys were making cookies (read: destroying the kitchen and mainlining brown sugar.)

My brother?  Supervising, as usual.  (My brother is either extraordinarily helpful or unbelievably useless in the kitchen.  Yesterday, he was completely worthless.  Doesn’t matter which extreme we get, he’s ALWAYS bossy.)

If you’re a parent, you know that making cookies with children is an exercise in patience.  Just imagine making cookies with two terrorists-in-training, cooking paella the old-fashioned way, while having your sibling quarterback from the couch.  (He’s a real foodie so his tips are often helpful but really — do we need to use the vanilla from Mexico not the one from St. Kitts, in the kids’ cookies?  I think not.)

Every so often my brother would come in to inspect what was going on.  (Inspect means taste and offer pithy comments.)  Hearing simultaneous uh-ohs as the entire bag of flour spilled on the floor, he came in for a fourth time to offer his two cents on why his kitchen resembled my dating life.

I did what any sane woman would do at the time.  I hit him with a wooden spoon.

Yeah, yeah, I know.  In front of the kids yadda yadda yadda.  Call Child Protective Services.  It was actually a playful swat.

Cute, I thought.  He’s very cute when he’s angry.  Then I looked at The Wee One.  2.0’s arms were crossed, his chin was jutted out so far a bird could perch on it and he was tapping his left foot.  “Time Out.” He grunted.  TWO does not talk.  He can but he chooses not to.  Why would you talk when you get everything you want without it? (And yes, that’s a rhetorical question for you social media folks.)

TWO pointed to the wall.  Emphatically he repeated, “TIME-OUT.”

I looked at my brother.  “Are you flipping kidding me?” I said with my eyes.  He nodded at the boys, both of their little bodies positioned in defiance.

“There is NO hitting in this house.”  Anonymous bellowed.  Oh how I wish my brother was like my friend, Brian, who doesn’t punish his kids till he sees blood.  (Of course, Brian is a single Dad so that kind of explains why he gets to skip all these think-about-what-you-did pleasantries.)

I looked at my brother as if to say “I hope your dinner burns to a crisp” (yes, I am the picture of maturity) and begrudgingly did the Walk of Shame to the Time-Out wall.

Anonymous is diabolically smart.  I was convinced that he was sending me to Time-Out so he could finish off the chocolate chips.  He had already “snuck” more than we had left to put in the cookies.

“How much longer?” I asked after being there for about 3 seconds.

“There is NO talking in Time-Out!” The boys said in unison.  (Technically, 2.0 just did his caveman thing.)  Thank goodness, Anonymous is a redhead, not a blonde, otherwise I’d think he was in some sort of futuristic Aryan training school.

Stand and face the wall.  No talking.

What fresh hell is this and what on earth does this have to do with web marketing, you may ask.

First, two minutes is a very long time. I never remember that until I actually have to be still for two minutes.  (Yes, my yoga teacher says that if savasana was graded, I would fail miserably.)  When you are looking at your user sessions (the length of time people stay on your site) and you think that “seven minutes isn’t all that long” think again.  Seven minutes is an eternity.

Second, not only does your web site have a lot of screaming girls but it’s also really like Time-Out for a lot of your users. Huh?  What the hell does that mean?  It means that the perspective that you see sending people there is not at all what it’s like when you’re facing the wall, er, when the users are looking at their computers.

Long ago, in the days before Tealeaf (one of my all-time favorite packages), I used to do something that I encourage you to try.  It’s not sophisticated and it’s not statistically significant but if you do it, I guarantee you will learn something useful about your site.  (Yes, @wilsonellis, @zkellyq and @jamesfowlkes, I am looking at you.)

Take 10 or so random sessions that have just happened on your site.  Look carefully at what each user has done, what they’ve seen and how they’ve exited.  Look at the first page they entered in on and then follow, page-by-page, what they clicked, trying to figure out what they did and where they went next.  Act like one of those CSI guys trying to recreate the crime.

It won’t take you long before you start envisioning things in a different way.  You might find that the person exited because they were on a dead end.  You may see that they got stuck on a page because there were no action buttons to click.  You might find that your navigation disappeared when it shouldn’t have or that things just all of a sudden got very confusing.  No, you won’t always find what or why they left but you will share their experience of your site and how it actually works in practice, not just in theory.

No matter what, you’ll see things from an entirely new perspective.

P.S. I am completely aware that #2 (not to be confused with TWO) above sounds cheesy but I really do encourage you to try it.  In the ole’ days (when I was walking uphill to work, both ways, in raging blizzards, with no jacket and only cardboard on my feet), those kind of duct tape and spit things were the only kind of “usability studies” our clients could afford.  I can’t begin to tell you how much I learned from doing that kind of stuff.  You’ll know what I mean once you do it.

P.P.S.  If you’d like to comment on my brother’s parenting skills, I am more than happy to give you his e-mail address so you can write him directly.  Being the “bad influence” that I am, he doesn’t much listen to me and when I say “much” I mean NOT AT ALL.