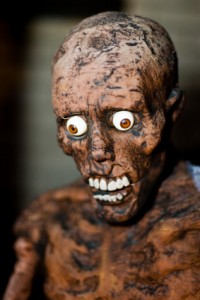 “I want to go to the Nuggies Store and NOT the scary people store.” Anonymous ordered, as if he had the one and only vote.
Anonymous is three and a half but he stirs up trouble like no boy — or man — I’ve ever met.

“And what store is that?” My brother asked.

“The store where Amy takes me.” The Diabolical One answered.

“The one with the SCARY people.” He shouted, having NO patience for this discussion. (They look so innocent in their car seats. What a flipping illusion that is.)

As my thoughts raced to exactly where I had taken him with scary people (no, none of the three choices above), I realized where it was. Two can play this game, I realized. “Where the bunnies are?” I asked.

“Yes.” He whispered, likely knowing I was about to bust him.

You could see my brother’s brain race to the nearest casino with the cocktail waitresses sporting only the latest in Playmates uniforms.

“Relax” I said. “The poker isn’t good till well after Anonymous goes to bed.” I paused, purposely. There’s nothing like getting older and still being able to poke your brother as much as you did when you kidnapped all his G.I. Joes and sold them back to him for about ten times what they were worth.

“He’s talking about Whole Foods. The organic carrots are right when you walk in. He thinks a lot of bunnies eat there.” I explained.

My brother raised one eyebrow. Obviously, he wasn’t buying it so I continued. “I took him there on Halloween. All the cashiers were in costume. Remember, I made you osso bucco? I had to get wine for it and the wine guy scared the hell out of him. He was dressed like a zombie.”

As my brother debated whether or not he should call the poker room to see if they have a Kid’s Klub (they do), I thought about first impressions and their impact.

I love Whole Foods so much that I want to marry it and have its babies. (As an aside, if you haven’t read I Love You More Than My Dog by Jeanne Bliss, you should do it now.*) However, I totally get why my nephew was traumatized. The wine guy is scary WITHOUT being dressed up. He knows way more than anyone should about wine AND on a good day, he looks like he just came out of a cave. (Think a milk-fed Osama Bin Laden.) Couple that with a ghoulish costume… you’d be terrified, ESPECIALLY if you believed in monsters.

Granted, my nephew would sell his thrice-mortgaged soul to the devil to eat at McDonald’s. (What the hell do they put in McNuggets?) But the truth is, even if he had never been to a McDonald’s in his life, that day at Whole Foods still would have had a lasting impression on him — an experience so traumatic that he’d never want to return.

I find that most folks — especially the “experts” — don’t talk enough about repeat visitors and how they impact your business.

Our knickers get twisted about bounce rates but we don’t focus enough on the people who come back and more important, how long it takes them to come back.

Of the ten or so metrics you MUST know about your business, that’s absolutely one of the most critical. Knowing if and when your customers repeat.

When someone new comes to your site today — whether you have a blog, a robust e-commerce site, or something in between, the user decides, in less than ten seconds, whether or not they’ll EVER come back. Some folks look at a lot of pages. Others leave on the very first one. But all of them decide if your site is a place they’d like to revisit.

It’s either that or figuring out what they put in those damn McNuggets.
*No, that was not an Amazon link or a sponsored anything. I avoid customer service/care books like the piggy flu. However, I happen to like Jeanne’s. It’s quick and worth a read. Plus, you’ve got to admit, the title alone makes it worth buying.