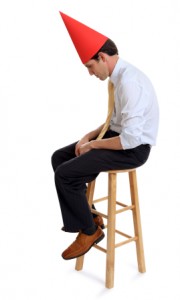 Last week I wrote about my inability to put together a piece of IKEA furniture.

Turns out that, based on the post, many readers had strong opinions about my intelligence (or lack thereof.)

According to exactly 38 emails, I am about as “skillful as a surgeon with the tremors. “  (And that was one of the nicer of the comments I received.  You’ve got to love those Southerners.)

What does that mean?

So 7% of the people who wrote think I am three French fries short of a Happy Meal.

Or, to put a more positive spin on it, I’m kid-tested and mother-approved (if only) by more than 9 out of 10 of my readers.

In my book, that’s fantastic.

Perhaps I think a 93% satisfaction rate is because I have a traditional (read: offline) direct marketing background) where we’re elated with pretty much any number over 2%.

Maybe it’s because I am just grateful for any response – good or bad.

More likely, it’s because I know that whether or not 9 out of 10 people like me and/or my stuff doesn’t really matter if they don’t buy, quote, inquire or take some other action that will make me money at some point.

I know.  I know.  That sounds very harsh.  What about people who recommend me?  What about the journalists who subscribe and sometimes even comment.  Don’t I care about them?

A little but not as much as I care about the people who have the highest propensity to buy.

Whether you are trying to generate leads or sales, you need to measure what matters.

I’ve been doing this internet thing since before Al Gore invented it.  I’ve made many mistakes and I’ve had many scores.  Two things that I know for sure are:

Measuring what matters on the web is critical.  Too often we get caught up in the wrong things – we get obsessed with social media mentions or our bounce rate, when we should be looking at our adoption to action.

What is adoption to action?  Any time a user completes a predetermined goal on your website.  (Your goal, not theirs.)

Let’s take ecommerce for example.  Right now, everyone and their brother talks about abandoned carts.  Don’t get me wrong, I’ve been talking about them for over fifteen years, I get the appeal.  Abandoned cart programs are sexy and they can make you a boatload,  yachtload, fleetload, of money.   However, if you don’t get enough adoption-to-cart – meaning not enough people add stuff to their carts/baskets – isn’t that a much bigger problem?

Yeah.  It certainly is.

Adoption to action as a percentage is one of, if not THE, most telling metric you have.

Yet very few people talk about it.

Because when it comes down to it, it’s a really depressing number.   We can spin conversion numbers ten ways to Sunday to make ourselves look good but adoption to action numbers are a bit different as they’re at a more qualified root level.

How do you determine your adoption to action number(s)?

First, figure out what action(s) you want.  What your end game is.  Again, if you’re an ecommerce site, you want an order.  If you’re a service site, you likely want an inquiry/lead.  If you’re a blogger, you may want something else — people to buy your ebook…. to use your consulting services…  to +1 you in Google?  Hopefully you have more of a strategy than just being liked or plussed but… whatever you want, put that in a big box at the top of your paper.

Then figure out what you need to measure to get whatever actions you need.  If you’re an ecommerce site, you want sales/orders/revenue, thus checkouts.  So the main action you want is for people to go through your checkout.  The only reason why people would checkout is because they add something in their cart.  So, to get checkouts (or to close sales/orders), you need to get someone to adopt-to-basket.  (In other words, put something in their cart.)  So, the things you will focus on most are things that will impact a user’s ability to add something to their cart or perhaps to sign up for your emails because that’s a long-term way of getting them to adopt to cart.  (This is especially true of triggers.)

There are bazillions of ways to get leads: free newsletters, webinars, podcasts, white papers, quotes, and ask the experts, to name a few.  So, on your paper, you’ll write lead.

After you figure out what action(s) you want, look at what you need to get those action(s).  Don’t look at anything else.  Just look at the action and how you’re getting it.

Does this process sound too simplistic to be of interest?  Absolutely.  Try it anyway.  The internet is purely a numbers game and this exercise will give you an idea of where you’re missing the most opportunities, which for me, definitely aren’t the comments questioning my intelligence especially when they start out “YOUR AN IDIOT.”

Perhaps Jackass but at least I know when to use you’re.